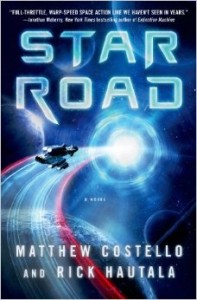 A new review of Star Road, written by Rick Hautala and Matthew Costello, has been posted on the blog Not Too Terrible. You can read the review here.

February 13, 2014 / goathunter / Comments Off on Rick Hautala Month at the Fleck Agency 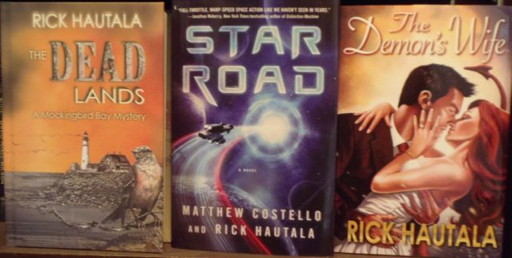 With the arrival recently of my agency copies of both STAR ROAD and THE DEAD LANDS, I declare this Rick Hautala month on The Fleck Agency’s page. Go forth and buy copies of Rick’s books and come here and talk about your memories of him. Comment on this post and I’ll enter you in a drawing on March 1. Three people will receive a free copy of one of the three books in the Agency header, so share this with your book loving friends.

To be clear which books are in the give away, I’ll be sending each of three lucky commenters on my post about Rick Hautala Month a copy of THE DEAD LANDS or THE DEMON’S WIFE from JournalStone Publishing or STAR ROAD coauthored with Matthew J. Costello and published by Thomas Dunne Books .

Star Road is a new, massive SF opera written by Matthew Costello and Rick Hautala. Today is the official publication date for the book, which is published in hardcover by Thomas Dunne Books (St. Martin’s Press).

A rebel and an outlaw lead an unsuspecting group of adventurers on a secret mission across the vastness of space, in Matthew Costello’s Star Road

Ivan Delgato, a former leader of a rebel group called the Runners, is released from jail on the condition that he carry out a secret mission for the World Council. His assignment is simple: stay under cover, but do absolutely anything necessary to reach the planet Omega IX and offer the renegade Runners clemency if they surrender—which may be complicated since Ivan’s brutally violent brother has taken lead of the Runners in Ivan’s absence.

In search of the Runners, Ivan catches a ride out to the wildest reaches of the galaxy via a mysterious transportation system, the Star Road. His fellow passengers on Star Road Vehicle-66 are a suspicious group, all with their own hidden reasons for traversing the star road. As the travelers contend with increasingly deadly encounters, it isn’t long before suspicions build against Ivan.

And as the Runners must choose one brother over the other, on a planet filled with ancient secrets, those who survive will confront a mystery that changes the Star Road, and humanity, forever.

Horror World has posted a rave review of Star Road, the upcoming SF novel co-authored by Matthew Costello and Rick Hautala. You can read the review on the Horror World site.

Star Road will be published in hardcover by Thomas Dunne Books (St. Martin’s Press) on January 14, 2014.

A new review of Star Road

Shock Totem has posted a new review of Star Road.

Star Road will be published in hardcover by Thomas Dunne Books (St. Martin’s Press) on January 14, 2014.

Reviews of Star Road from PW and Kirkus Reviews!

November 19, 2013 / goathunter / Comments Off on Reviews of Star Road from PW and Kirkus Reviews! 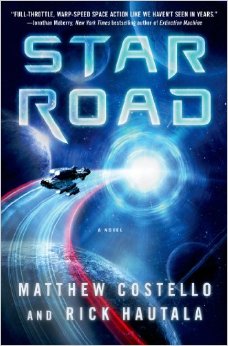 Reviews of January’s Star Road, the sci-fi novel by Matt Costello and Rick Hautala, have been published by Publishers Weekly and Kirkus Reviews!

The book will be published in hardcover by Thomas Dunne Books (St. Martin’s Press) on January 14, 2014.