Reviews of Mister October from around the ‘net

November 21, 2013 / goathunter / Comments Off on Reviews of Mister October from around the ‘net

Reviews of Mister October: An Anthology in Memory of Rick Hautala are popping up around the ‘net. Here are links to some of them:

You can purchase Mister October from JournalStone, as well from Amazon.

As you may know, Rick Hautala passed away unexpectedly last spring. JournalStone Publishing is releasing a tribute to this great author, and 100% of the profits will be going to the Hautala family. There are some huge names in the world of horror that contributed to this effort, and you can buy a limited edition release of the book signed by ALL of the contributors. You’ll never again see an opportunity like this. To get your copy, simply click here.

Featuring over 45 individual contributors, almost 800 pages, over 240k words, original Clive Barker artwork, over 30 illustrations and so much content we had to put it into two volumes.

Christopher Golden – “On March 21st, 2013, I received a phone call from Holly Newstein telling me that her husband, Rick Hautala, had suffered a massive heart attack.  That piece of information shocked me into a surreal sort of panic, so much so that at first I could not make the leap to the next thing she said…that he had died.  It seemed impossible.  Rick had been such a good friend, such a consistent and stable force in my life, that the idea of him being so suddenly removed from this world…I just couldn’t make sense of it.

This isn’t the place for me to put my grief on display.  Suffice it to say that Rick’s passing hit me hard.  Not a day goes by that I do not feel the pain of his absence.

I have no doubt that readers will treasure this two-volume set.  It is my hope that as you read, you will ruminate a little bit about the man for whom we all have come together within these pages.  And I hope you’ll urge others to pick up their own copies of Mister October as well.” 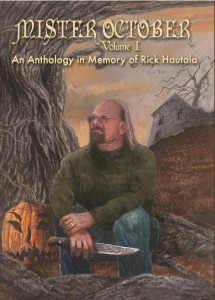 Horror World has posted a review of Volume 1 of Mister October: An Anthology in Memory of Rick Hautala. You can read it on the Horror World website.

You can purchase the anthology from JournalStone.

Multi-author signing for Mister October on October 24 in Cambridge, MA!

September 25, 2013 / goathunter / Comments Off on Multi-author signing for Mister October on October 24 in Cambridge, MA!

There will be a multi-author signing at Pandemonium Books in Cambridge, MA, on Thursday, October 24, 2013, for Mister October: An Anthology in Memory of Rick Hautala. The hardcover and trade paperback editions of Mister October are shipping now from JournalStone!

The authors appearing will include Holly Newstein Hautala and Christopher Golden, who edited the anthology.

The Demon’s Wife news: Paperback next week and some reviews

September 6, 2013 / goathunter / Comments Off on The Demon’s Wife news: Paperback next week and some reviews

The Demon’s Wife can also be ordered from Amazon.

The Demon’s Wife is Book Chick City’s book club pick of the month for October. You can visit their site here.

A couple more reviews have been posted recently:

Finally, the book will be featured in the National Examiner soon.

Rio Youers on why you should buy Mister October, the Rick Hautala memorial anthology

August 13, 2013 / goathunter / Comments Off on Rio Youers on why you should buy Mister October, the Rick Hautala memorial anthology

Author Rio Youers has posted on his blog giving you great reasons you should purchase one or both volumes of Mister October: An Anthology in Memory of Rick Hautala. You can read his blog post here.

You can pre-order the books from JOURNALSTONE or AMAZON now.

The Rick Hautala memorial anthology is now available for pre-ordering

July 22, 2013 / goathunter / Comments Off on The Rick Hautala memorial anthology is now available for pre-ordering

Mister October: An Anthology in Memory of Rick Hautala can now be pre-ordered from JournalStone Publishing. The book is edited by Christopher Golden and features over 45 contributors, more than 30 illustrations, and more than 800 pages in two volumes.

The book will be published in hardcover, trade paperback, and ebook formats, in addition to a limited edition set. The publication date in November 8, 2013.

For more information and to pre-order your copy, visit JournalStone Publishing or click on the image.

May 24, 2013 / goathunter / Comments Off on Quick update on Mister October, the Rick Hautala Tribute anthology

So…the Rick Hautala memorial benefit anthology MISTER OCTOBER turned out to be so friggin’ huge that we had to split it into two volumes. [Otherwise it would’ve been close to 1000 pages.] Wait until you see the table(s) of contents.

We join the entire literary community and Rick Hautala’s multitude of fans and admirers in mourning the sudden, untimely passing of a true literary giant—someone whose thirty-plus-year body of work has left an indelible mark and whose unique, individual voice has even influenced the shape and texture of how stories are written.

With a mixture of sadness and shock at his untimely passing we are honored to announce that, with the full support of the Hautala Estate, we will be releasing a special tribute anthology titled: Mister October: An Anthology In Memory Of Rick Hautala. The anthology is being edited by one of Rick’s best friends, the celebrated author, comic book writer and editor, Christopher Golden, who has previously edited such anthologies as The New Dead and The Monster’s Corner, among others.

“Mister October is the ultimate labor of love,” Golden said.  “The shock and grief that hit so many of us in the wake of Rick’s death was compounded by the news that due to financial struggles, he had canceled his life insurance shortly before his passing. Knowing how many writers and artists admired his work and how many loved him, I put the anthology together as a way to help those Rick left behind. The reaction from those I asked to contribute was immediate and startling. Rick would have been stunned by the outpouring of support, including from the fine folks at Journalstone, who have generously agreed to donate all services to the project, so that every penny of profit from sales of the book in all formats will go to the Hautala estate.”

We are also honored to announce that, with the full support of Rick’s widow, Holly Newstein, and the late author’s estate, JournalStone Publishing will be releasing Rick Hautala’s final two novels.  The deal was struck only weeks before the author’s death.  Rick was extremely proud of both novels, which he considered among his finest work, and he was very excited at the prospect of their both seeing a release in the near future. The first of these novels, The Demon’s Wife, is a multi-genre blockbuster combining elements of Romance, Horror, and Mystery with the author’s distinctive touch of dry humor, and is set for release September 13, 2013. The second novel, Mockingbird Bay, is a brilliant combination of classic Ghost Story and Murder Mystery and is also set for expedited release in the summer of 2014.

About the Anthology: Rick Hautala was a master of modern horror, a mentor to the next generation, and winner of the HWA’s Lifetime Achievement Award.  In Mister October, his friends and admirers in the writing community honor his memory in the best way they can—with stories. Neil Gaiman, Clive Barker, Peter Straub, Kevin J. Anderson, Graham Joyce, Joe R. Lansdale, F. Paul Wilson, Kim Newman, Holly Newstein and dozens of our greatest dark fiction authors have contributed notable stories to this huge anthology, expected to total about 450 pages, in memory of the horror master Rick Hautala.  The volume will also include art from Clive Barker, Stephen R. Bissette, Glenn Chadbourne, and Cortney Skinner. All profits will go to benefit the late author’s estate.

About the Author: Rick Hautala (02/03/1949-03/21/2013) was the recipient of the Horror Writers Association (HWA) Bram Stoker Award for Lifetime Achievement for 2011, which he received at the Bram Stoker Awards Banquet in Salt Lake City, Utah on March 31, 2012. He served terms as Vice President and Trustee for the HWA. Rick had more than ninety published novels and short stories to his credit, including the million-copy, international best-seller Nightstone, as well as Twilight Time, Little Brothers, Cold Whisper, Impulse, and The Wildman. He also published four novels—The White Room, Looking Glass, Unbroken, and Follow—using the pseudonym A. J. Matthews. His more than sixty published short stories have appeared in national and international anthologies and magazines. His short story collection Bedbugs was selected as one of the best horror books of the year in 2003. A novella titled Reunion was published by PS Publications in December, 2009; and Occasional Demons, a short story collection, was published by CD Publications. He wrote the screenplays for several short films, including the multiple award-winning The Ugly Film, based on the short story by Ed Gorman, as well as Peekers, based on a short story by Kealan Patrick Burke, and Dead @ 17, based on the graphic novel by Josh Howard. A graduate of the University of Maine in Orono with a Master of Art in English Literature (Renaissance and Medieval Literature), Hautala died on March 21, 2013 from a heart attack and is survived by his widow, author Holly Newstein, and three grown sons.

JournalStone Publishing is a small press publishing company, focusing in the Science Fiction/Fantasy/Horror genres in both the adult and young adult markets. JSP also owns and operates the Hellnotes website, offering daily news and reviews of interest to genre readers and fans, and Dark Discoveries Magazine, a slick, full color, distinguished and internationally distributed quarterly magazine. We publish in multiple book formats and market our authors on a global level. We are also active with major writer’s groups, including the Horror Writers Association (HWA), and produce a monthly newsletter with exposure to thousands of people.