December 22, 2014 / goathunter / Comments Off on The Cove trade paperback is now available 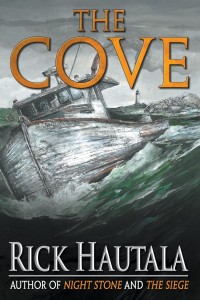 The Cove is also available in ebook formats from Amazon, B&N, and Smashwords.

Most people who visit coastal Maine see only the stark and rugged beauty of the pine groves and rocky beaches. But for those that live and work there, it’s very different. The Cove tells the tale of a family, deeply rooted in Maine, and of a town where corruption and the Mob play a dark counterpoint to the idyllic postcard images. Ben Brown comes back to Hudson’s Cove after serving in Iraq. Fighting PTSD and a sense of failure, he finds his hard-drinking fisherman father running drugs, his sister struggling in a violent marriage, and his brother sullen and withdrawn. He falls quickly for Julia, a woman “from away,” who has a devastating secret. As Ben tries to unravel the secret and help his family survive, events in The Cove pull him like a rip current toward a final cataclysm. Rick Hautala’s only mainstream novel draws heavily on his own experiences growing up in a coastal town, where fishermen struggled to make ends meet and things were not always as they seemed. Rich characters and a gripping story reveal what life at the edge of the sea really is . . .