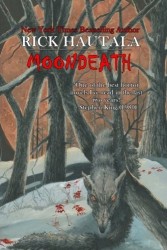 Pete Giglio reached out to me today and we talked about what we could do to help Holly Newstein Hautala. Rick Hautala, was a big inspiration to me and a good friend. I miss him. I’m still in shock. Anyway, Pete posted this, and we want to help. “For all of 2013, Evil Jester Press and I are forfeiting our royalty stake in MOONDEATH. All profits will now roll to Holly Newstein Hautala. The book is now selling well, which would have made Rick happy. MOONDEATH was his first novel, and it’s one of my favorites. When EJP reprinted it, Rick wanted to stick to original 1980 Zebra text. The two months I spent retyping the text from the old mass market paperback, not to mention the several times I reread the manuscript, was a journey I’m glad I took. Typing the same words (in the same order) on my PC that Rick Hautala had typed decades earlier…well, that was cool. We will do more. This is a start”.

The AudioComics Company has a series of audio adaptations of horror stories called Horrorscopes. The first episode of the first season is an adaptation of Rick Hautala’s “The Nephews.” Rick also provides the introduction to the series. AudioComics has made this announcement:

The AudioComics Company was saddened to learn of the sudden passing of horror writer Rick Hautala on March 21, 2013. In honor of Rick, 100% of the net proceeds from downloads of “The Nephews” will go to his widow, Holly Hautala.

You can read more about Horrorscopes and buy episodes from their website. 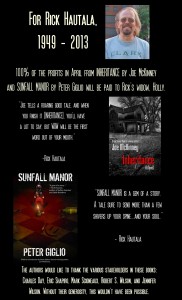 And now there’s more from Joe McKinney and Pete Giglio and Evil Jester Press. 100% of the profits in April from Joe McKinney’s Inheritance and Peter Giglio’s Sunfall Manor will be paid to Rick’s widow, Holly.

Do not buy these books in lieu of donations. The best way to help is to donate directly to Holly Newstein Hautala (see Christopher Golden’s post). That said, Joe McKinney and I were touched by Rick Hautala‘s support of our recent ghost stories, INHERITANCE and SUNFALL MANOR. This is just our little way of paying that support back. Special thanks to the additional stakeholders in these titles for donating their profits for April: Charles Day, Eric Shapiro, Mark Scioneaux, Robert Shane Wilson, and Jennifer Wilson, and everyone at Evil Jester Press and Nightscape Press. Without their generosity, we couldn’t do this.

Click on the image to view more information about this.