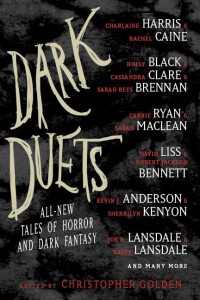 BeforeItsNews.com has posted a review of Dark Duets. The review has this to say about “Trapper Boy,” the story by Rick Hautala and Holly Newstein-Hautala:

“Trapper Boy” by Holly Newstein and Rick Hautala is set in a coal mining town. John’s father thinks it’s time John started working in the mines, while his mother would like to see him go to school. John himself would like to study to become an artist, but he’s nine years old already, and it’s time for him to contribute to the family’s budget. Mr. Comstock hires John as a trapper for sixty cents a week, working 12 hours each day for six days a week. That means John sits in the dark and cold, waiting to open the mine shaft doors for the mules bringing coal to the surface. Things are looking grim for John until his mother buys him a box of colored chalks, and he uses them while on the job to draw animals on the doors by the light of his small lantern. It seems like a sentimental story until the sharp edges come through. This is one of the best stories in the book, a stand-out in the otherwise weaker second half of the book.

Dark Duets can be ordered in paperback from Amazon US and Barnes and Noble. Ebooks are available for Kindle and NOOK, too.